Air solutions for a sudden increase in demand

We wanted to share this great story from KAESER in Germany demonstrating how one business quickly ramped up their production due to a sudden increase in demand.

From the onset of the Coronavirus pandemic, the demand for FFP2 protective masks shot up rapidly. UNIMATIC Automationssysteme GmbH, a successful manufacturer of customised assembly, production and testing systems from the Bavarian municipality of Grub am Forst, was able to erect the necessary production systems from scratch in next to no time.

Their existing compressed air supply, however, could not cope with the sudden increase in demand.

Ever fast and flexible, KAESER was on hand to assist with a MOBILAIR M 27E portable air compressor with electric drive.

In March of 2020, this 40-year old family business was on the receiving end of a particular challenge, which would require all the considerable collective innovation at their disposal across six sites worldwide.

It was during that month that the government in Germany determined there was a lack of protective medical equipment in the country and requested that German manufacturers plug the gap.

Off the back of this call, UNIMATIC received an order to build a new system for producing FFP2 protective masks.

“We had to be quick, the need was urgent,” Alexander Raps, Managing Director of the company explains. “We had to be ready to deliver by the middle of August. This meant that we did not have time to follow our usual method of building the systems, delivering them to the customer and then commissioning them. We would have to operate them directly at our facility instead.”

Alexander Raps had underestimated one important aspect: “I had the big picture in view and we had employees who could operate the systems, but there was one thing I had not considered and that was the infrastructure”. In other words, the compressed air supply. In normal times, the company only runs one production cycle in which systems are tested. Furthermore, the test process does not usually take long, nor do multiple systems normally have to be run in parallel. Inevitably, this meant that the existing compressed air station could not deliver the required air demand.

“It transpired that we needed almost 1000 litres per minute, when we had only planned for 500,” explains the Managing Director. Despite this setback, however, a solution was quickly arrived at.

A key stage in the production process – attaching the headbands and connecting the lengths of fabric via ultrasonic welding – relied on a significant amount of cooling by means of compressed air. Air demand for this part of the process was so high that the existing supply could not cope. The combined daily output of the three production systems amount to some 150,000 FFP2 protective masks, meaning that a day’s downtime results in a severe impact on the customer.

A solution was needed – and fast. “Alexander Raps contacted us and asked for our advice,” recalls MOBILAIR Production Manager Ralf Hereth. “Their existing air station was designed for the demands of normal production circumstances at UNIMATIC, so it was no surprise that the delivery volume proved inadequate when additional consumers were brought into the picture.” However, expanding the compressed air supply was no simple task. A general lack of space and the absence of compressed air hosing posed a considerable challenge for KAESER’s experts. It was not just a matter of installing an extra rotary screw compressor.

“Some of the hurdles we encountered included the issue of space and the limited strength of the electrical connection,” explains Ralf Hereth. “We needed to find a solution that could manage with a connection of 32 amps maximum, because UNIMATICS could not provide more without installing new equipment.” Not only that, but this family business was located in close proximity to a residential area – which had ramifications in terms of the permissible exhaust and sound emissions. It was this factor above all that pushed thoughts of a diesel-powered portable compressor out of the running and brought into play an electric version.

The MOBILAIR M 27E portable air compressor features a near-silent electric drive producing zero emissions. A 32-amp socket with CEE connector is all that is needed is connect this portable powerhouse to the required power supply. This compact compressed air unit delivers 2.6 m³/min at 7 bar. This means that not only is the M 27E ideal for construction sites, but can also serve as a fast and flexible bridging solution in the event of compressed air bottlenecks or a breakdown of the existing compressed air station in an industrial setting. 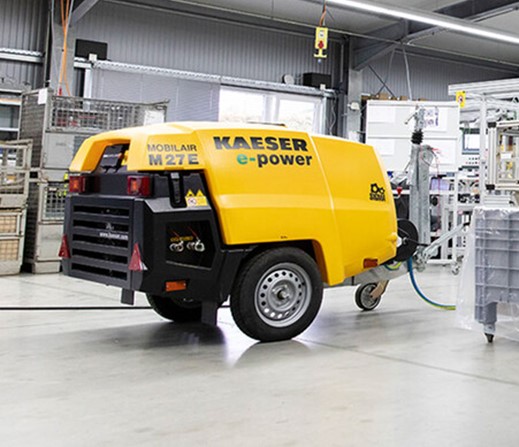 Robust construction means that the M 27E boasts the ability to operate at 100% duty cycles in ambient temperatures between -10 and +40 °C.

“Also, in our case, the optional hose reel proved worth its weight in gold,” comments Ralf Hereth. This feature meant that the lack of compressed air lines posed no problem at all. All that was needed was to plug it in and production was up and running again.

Alexander Raps was extremely impressed by the swift and straightforward assistance they received from their neighbours in Coburg: “A solution was found over the weekend – that really stood out for me, given the size of their company,” he enthuses. “We have been working with KAESER for a long time now and are as satisfied with them as we always have been. For me, the capabilities of a company are proven in matters of service, not sales.”

The partnership with KAESER of Germany is at the heart of HPC’s business in the UK. HPC KAESER offers a wide range of individual compressors, blowers, and equipment for compressed air treatment for lease, purchase and rental.

If you are looking to expand or change your manufacturing operation, talk to your local distributor.

Get In Touch With HPC Today

Do you need help finding the right air compressor solution or compressed air system for your business?

Speak to an expert

If you are looking for more detail on any of our products, check out the downloads area